The Owego Fire Department was founded in August 1828 after the village was plagued by numerous fires. The department’s original firefighting apparatus was a hand-pulled hose wagon where the water was supplied by hand operated pumps mounted in wagons. Water was dumped into the wagon by a line of people using water buckets. As technology progressed, water reservoirs were built above the village to provide water flow to a fire hydrant system. As Owego grew, newer two and three story buildings were built in the downtown area. As a result the old hand pumping equipment was not adequate to pump water high enough to reach the upper floors of these buildings. A direct result of not having adequate equipment was a large conflagration now known as “The Great Fire of Owego.” The fire broke out on September 27, 1849 in the Temperance Hall of the Ely building. In the end, a total of 104 buildings within the business district were completely burned to the ground. 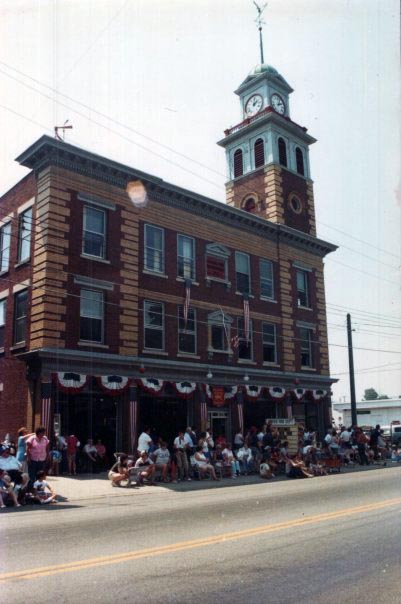 In 1866 Owego purchased a new steam engine from the Amoskeag Manufacturing Company of Manchester, New Hampshire. This new engine was horse drawn and could pump water up to 250 feet. A new fire company was formed to be responsible for the new engine and it was named the Ahwaga Steam Fire Company #6. Owego was the first village in the area to have a steam pumper. Once during a large fire in Ithaca, Owego’s steam pumper was requested and sent by railroad to fight the fire. Owego was also one of the first in the area to purchase a horse drawn ladder wagon to help reach upper floors during a fire.

As the turn of the century came, there were a total of six fire companies; Susquehanna Engine Company #1, Wave Hose Carrier Company #2, Croton Engine Company #3, Hiawatha Chemical Company #4, Defiance Hook and Ladder Company #5 and Ahwaga Steam Fire Engine Company #6. As firefighting advances were made, the Owego Fire Department started to replace their horse and man-pulled wagons and carts with gas engine apparatus. The steam engine was finally taken out of service in 1926, and two companies (Ahwaga Steam Fire Company #6 & Defiance Hook and Ladder Company #5) were combined to form the Ahwaga Ladder Co. #5, still in existence today. 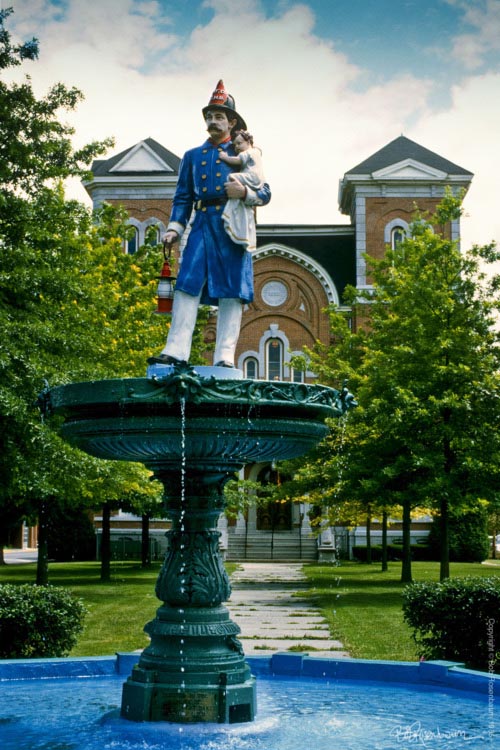 The fountain was given to the Village of Owego and its firefighters in 1914 by Frank M. Baker as a memorial to his son, George Hobart Baker, who was killed in an automobile accident in 1913. Both men had been members and chief engineers of the Owego Fire Department.  Frank Baker wanted a memorial “to ensure his son would never be forgotten.” The fountain “is a reminder of the love Frank Baker had for his son and the fire department.”

Over 100 people attended a rededication of the George H. Baker Memorial Fountain in Courthouse Square in Owego on July 29, 2000.  The then 86 year old fountain, which features a statue of a fireman holding a child, underwent much needed repair and restoration over the summer of 2000.

Origin of the Maltese Cross

The Maltese Cross is a symbol of protection, a badge of honor, and its story is hundreds of years old. When a courageous band of crusaders, known as the Knights of St. John, fought the Saracens for possession of the Holy Land, they were faced with a new weapon not known to European fighters. It was a simple but horrible device of war. The Saracens weapon was fire. 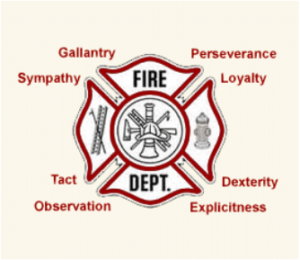 As the crusaders advanced on the walls of the city, they were bombarded with glass bombs containing naphtha. When they were saturated with the liquid, the Saracens threw flaming torches into the crusaders. Hundreds of knights were burned alive while others risked their lives in an effort to save their kinsmen from painful fiery deaths. Thus these men became the first Firemen, and the first of a long line of Firefighters. Their heroic efforts were recognized by fellow crusaders who awarded each other with a badge of honor similar to the cross firefighters wear today.

Since the Knights of St. John lived for close to four centuries on the island of Malta, in the Mediterranean Sea, the cross came to be known as the Maltese Cross. The Maltese Cross is your symbol of protection. It means that the Firefighter that wears this cross is willing to lay down his life for you, just as the crusaders sacrificed their lives for their fellow man so many years ago.

History of Dalmatians in the Fire Service

Ever see a fire truck in a parade without a Dalmatian in the seat up front or in the lap of a smiling fireman riding in back?  Ever visit a firehouse without having one of those black and white spotted dogs come wagging up to you?

Why is that? Why do Dalmatians and firehouses go together like smoke and fire? The answer is interesting, and one you’ll likely recall every time you see the Dalmatian/firehouse combo from now on.

It all began in the days of stagecoaches. Horse theft was so common back then that many stagecoach drivers strung a hammock between two stalls at night, then slept behind their horses to guard against thieves.

But, if the driver owned a Dalmatian, he could sleep in the house or the stagecoach hotel. Why? Because it was observed that Dalmatians formed an amazingly tight bond with horses. When they became close as with a team, no stranger would dare lay a hand on them.

Once the knowledge of this trait spread, more coach drivers went to great lengths to get Dalmatians to watch their teams. In fact, this practice became so common that Dalmatians were first called “coach dogs”. They were used by coach drivers centuries ago in England, Scotland and Wales.

“Dalmatians have always gotten along well with horses,” says Esmeralda Treen of Milwaukee, Wisconsin, a recognized authority on the breed. “Horses are gregarious and feel the need for company. You can’t leave them alone too long. Dalmatians take to horses and become ‘companions’. Back in the stagecoach days, the ‘Dals’ would run alongside the coaches, or under the rear axle of the moving coach. They’d keep up with the team as far as it ran, sometimes over 20 or 30 miles a day.

“When the coaches reached the inn, the coachman left the dog to guard the team as well as luggage in the coach,” Esmeralda explains. “IF the coachman stayed to guard, a robber would sometimes distract him in conversation while others pilfered the goods. They couldn’t pull that ruse on the Dal, since they’re very alert dogs.”

When horse numbers grew here in the New World, the number of Dalmatians grew with it for the same reason they were popular in the Old Country. And, since every firehouse back then had a set of fast horses to pull the pumper wagon, it became common for each group of firemen to keep a Dalmatian.

Again, the spotted dogs not only guarded the firehouse horses, they kept them company during their long, boring waits between fires. And, when they took off for a fire, the dog would run alongside the pumper.

The horses are gone from the fire stations today, but the Dalmatians aren’t. The tradition has been carried on, and it may be as much for the looks and appeal of these beautiful dogs as it is for their nostalgic tie to yesteryear.

While all the facts are well founded, there is a common but false rumor that these spotted dogs that breed enthusiasts would like dispelled. It’s that Dalmatians are kept at firehouses because they’re deaf and therefore, the siren does not bother their ears nor make them “spook” like it would other dogs.

“I once heard that on national TV and could not believe my ears,” says Chris Benoit, president of the Chicago land Dalmatian Club. “It’s true that there is a problem with deafness in the breed, but that story is totally false!”

What is true is that Dalmatians are the fastest growing breed of dog in America today. A relative rarity until recent years, Dals are expected to soar into the top ten soon, right up there with beagles and dachshunds.